Gastro paresis is a condition in which, damaged vagus nerve prevents the muscles in the stomach and intestine from functioning normally. Results in slow motility of stomach or no motility at all, further preventing stomach from emptying properly. 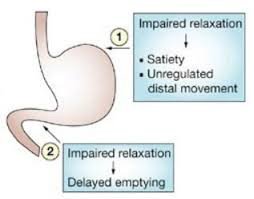 Gastro paresis means weakness of the muscles of the stomach, which results in poor grinding of food in the stomach into small particles and slow emptying of food from the stomach into the small intestine. When stomach does not get empty itself of food in a normal manner, that show there is some damage to the vagus nerve, which regulates the motility of digestive system. Often, the cause of gastro paresis is unknown. What are the causes of gastro paresis ?

Gastro paresis can be caused either by diseases of the stomach’s muscles or the nerves that control the muscles, though often no specific cause is identified. The most common disease causing gastro paresis is diabetes mellitus, which damages the nerves controlling the stomach muscles. Other possible causes may be as given below:

What are the sign and symptoms of Gastro paresis ?

Signs and symptoms of gastro paresis include:

What are the investigations to diagnose Gastro paresis ?

What are the Complications of Gastro paresis ?

Gastro paresis can cause several complications, such as:

What is Ayurvedic Treatment for Gastro paresis ?

In other systems of medicines, medicines are given which stimulate the stomach muscles and has serious side effects such as diarrhea,cramping etc and the medications to control nausea and vomiting are prescribed but in Ayurveda, gastro paresis can be cured by Panchkarma, Shodhna and Rasayana therapies along with oral herbal remedies and by making some changes in the diet without any side effects.
In Ayurveda, it is believed that Mandagni is the root cause of almost all the diseases. If the digestive system is working properly, it leads to the complete digestion of the food and assimilation of the nutrients in the body and followed by proper excretion. By above explained line of treatment, here at Ketav’s Ayush Health Paradise we work on resetting the nervous system related issues that is balancing the vata dosha, and digestion, assimilation along with excretion by reestablishing the Tri dosha (vata, pita & kapha) equilibrium.

What should be the diet for Gastro paresis patients ?

Diet plays a major role in case of gastro paresis, more frequent portions of food are recommended. Soft foods (or preferably liquid) that do not require grinding also are emptied more easily. Emptying of the stomach is faster when there is less food to empty and emptying of liquids often is less severely affected than the emptying of solids. Also food which has more fat contents causes the release of hormones that slow down the emptying of the stomach. Therefore, foods low in fat empty faster from the stomach also the liquid and low fiber foods get emptied faster.
Food should be chewed well since the grinding action of the stomach is reduced. Meals should be taken with enough liquids to ensure maximal liquidity of contents in the stomach since liquids usually empty better than solid food.
Patients with gastro paresis should have most food early in the day, especially the solid food; they should not lie down for 4-5 hours after their last meal, since when lying, the assistance of gravity on gastric emptying is lost.
Multivitamins should be taken because of the likelihood of malnutrition and vitamin and mineral deficiencies.

Panchkarma roots off all the toxins from body and mind, fight aging and gives longevity of life